Catholic Family News, since its founding has never ceased to call upon the hierarchy of the Church to recognize the destruction wrought by the Second Vatican Council and to do something to correct the errors and dangers that stem from it. In these dark times, two brave voices have been raised up among the episcopacy who have called, although in different ways, for a critical appraisal of this unique event in the history of the Church. Archbishop Carlo Maria Viganò and Bishop Athanasius Schneider have been for some time issuing statements calling for a correction of the Second Vatican Council. Not surprisingly their excellencies have received harsh criticism and unjust insults as a result of their fortitude in preaching the truth out of season.

The letter which is reproduced below is being published simultaneously in English, Italian, Spanish, Portuguese, and French.

Everyone who supports the Open Letter can add their name to the Petition to the Holy Father and the Entire Hierarchy supporting the Open Letter.
Below is the full text of the Open Letter. We at CFN are honored to support this effort and only wish that long time editor of CFN John Vennari (RIP) could have seen this day when two bishops call openly for this reconsideration of Vatican II. This has not been seen for decades since Archbishop Lefebvre and Bishop de Castro Mayer joined to call on John Paul II to return to Tradition.

We the undersigned wish to express our sincere gratitude for your
fortitude and care for souls during the ongoing crisis of Faith in the
Catholic Church. Your public statements calling for an honest and open
discussion of the Second Vatican Council and the dramatic changes in
Catholic belief and practice that followed it have been a source of hope
and consolation to many faithful Catholics. The event of the Second
Vatican Council appears now more than fifty years after its completion
to be unique in the history of the Church. Never before our time has an
ecumenical council been followed by such a prolonged period of
confusion, corruption, loss of faith, and humiliation for the Church of
Christ.

Catholicism has distinguished itself from some false religions by its
insistence that Man is a rational creature and that religious belief
encourages rather than suppresses critical reflection by Catholics.
Many, including the current Holy Father, appear to place the Second
Vatican Council—and its texts, acts, and implementation—beyond the reach
of critical analysis and debate. To concerns and objections raised by
Catholics of good will, the Council has been held up by some as a
“super-council,” (1) the invocation of which ends rather than fosters
debate. Your call to trace the current crisis in the Church to its roots
and to call for action to correct any turn taken at Vatican II that is
now seen to have been a mistake exemplify the fulfillment of the
episcopal office to hand on the Faith as the Church has received it.

We are grateful for your calls for an open and honest debate about
the truth of what happened at Vatican II and whether the Council and its
implementation contain errors or aspects that favor errors or harm the
Faith. Such a debate cannot start from a conclusion that the Second
Vatican Council as a whole and in its parts is per se in
continuity with Tradition. Such a pre-condition to a debate prevents
critical analysis and argument and only permits the presentation of
evidence that supports the conclusion already announced. Whether or not
Vatican II can be reconciled with Tradition is the question to be
debated, not a posited premise blindly to be followed even if it turns
out to be contrary to reason. The continuity of Vatican II with
Tradition is a hypothesis to be tested and debated, not an
incontrovertible fact. For too many decades the Church has seen too few
shepherds permit, let alone encourage, such a debate.

Eleven years ago, Msgr. Brunero Gherardini had already made a filial
request to Pope Benedict XVI: “The idea (which I dare now to submit to
Your Holiness) has been in my mind for a long time. It is that a
grandiose and if possible final clarification of the last council be
given concerning each of its aspects and contents. Indeed, it would seem
logical, and it seems urgent to me, that these aspects and contents be
studied in themselves and in the context of all the others, with a close
examination of all the sources, and from the specific viewpoint of
continuity with the preceding Church’s Magisterium, both solemn and
ordinary. On the basis of a scientific and critical work—as vast and
irreproachable as possible—in comparison with the traditional
Magisterium of the Church, it will then be possible to draw matter for a
sure and objective evaluation of Vatican II.” (2)

We also are grateful for your initiative in identifying some of the
most important doctrinal topics that must be addressed in such a
critical examination and for providing a model for frank, yet courteous,
debate that can involve disagreement. We have collected from your
recent interventions some examples of the topics you have indicated must
be addressed and, if found lacking, corrected. This collection we hope
will serve as a basis for further detailed discussion and debate. We do
not claim this list to be exclusive, perfect, or complete. We also do
not all necessarily agree with the precise nature of each of the
critiques quoted below nor on the answer to the questions you raise, yet
we are united in the belief that your questions deserve honest answers
and not mere dismissals with ad hominem claims of disobedience
or breaking with communion. If what each of you claims is untrue, let
interlocutors prove it; if not, the hierarchy should give credence to
your claims.

Papal Primacy and the New Collegiality

We have taken note of the differences you have highlighted between
the solutions each of you has proposed for responding to the crisis
precipitated at and following the Second Vatican Council. For example,
Archbishop Viganò has argued it would be better to altogether “forget”
the Council, while Bishop Schneider, disagreeing with him on this
specific point, proposes officially to correct only those parts of the
Council documents that contain errors or that are ambiguous. Your
courteous and respectful exchange of opinions should serve as a model
for the more robust debate that you and we desire. Too often these past
fifty years disagreements about Vatican II have been challenged by mere ad hominem attacks rather than calm argumentation. We urge all who will join this debate to follow your example.

We pray that Our Blessed Mother, St. Peter the Prince of the
Apostles, St. Athanasius, and St. Thomas Aquinas protect and preserve
your Excellencies. May they reward you for your faithfulness to the
Church and confirm you in your defense of the Faith and of the Church. 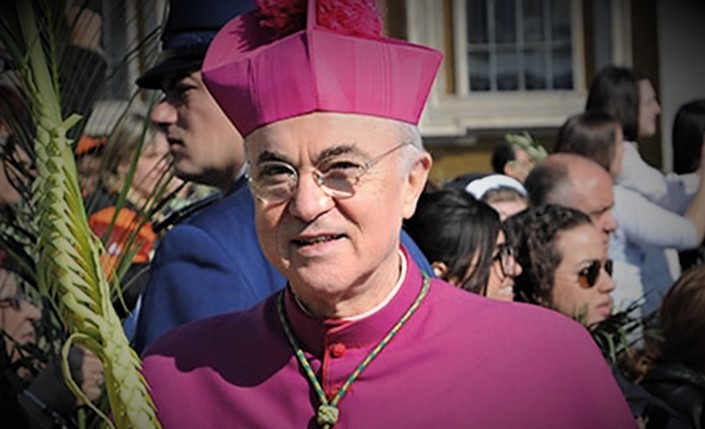 Abp. Viganò to Spanish Supporter: “Loving Fidelity to the Truth of Christ” is Proper Response to “Conciliar Revolution”